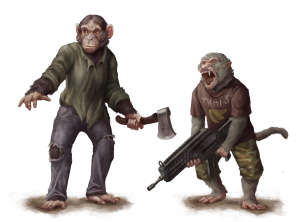 Simians are descended from Old World primates whose evolution was kickstarted by radiation. While not all primates evolved, many did and these are their children and grandchildren. Simians are quite frequently the reason why many of the zoo animals that escaped and evolved into the creatures of the wastes.

Simians are new to the concepts of sentient culture, so they have difficulties with social interactions, particularly with non-simians, giving them penalties to Charisma and Luck. They are, however, very clever and quick learners, so they adapt to new situations and environments easily, giving them a +1 to Intellect. Due to their recent evolution, they also retain some of the keen senses and agility of their wild kin, providing them with a +1 to Perception and Agility.